The history of
Hotel New York 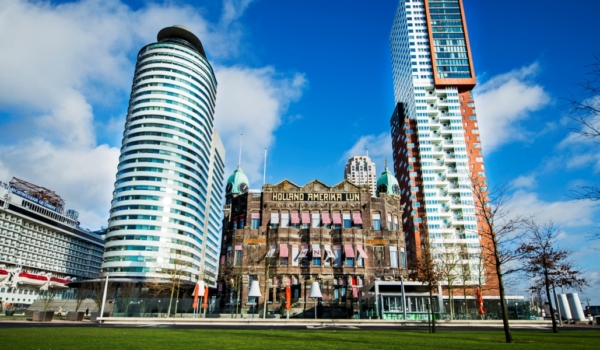 From 1901 on, the iconic building on the Kop van Zuid shines and stands tall. The historical Holland America Line was replaced by the hotel-restaurant Hotel New York. The building has a great history and we are glad to take you back in time with memorable moments and a warm atmosphere. Let us surprise you with all that Hotel New York has to offer.

Hotel New York over the years

A journey through history

1873     In 1873 the Nederlandsch Amerikaanse Stoomvaart Maatschappij company was founded by Antoine Plate and Otto Reuchlin.

1901     This office was built in the Jugendstil style in 1901 by the architects J. Muller and Droogleever Fortuin

1908     The construction of a warehouse at the back of the head office.

The office was expanded with a 38 meter high tower designed by C.B. Van der Tak.

1971     Due to increasing aviation competition, the Holland America Line’s (HAL) decides to end the timetable on New York and focuses more on the cruise ship from America.

1984     The HAL sells the administration building to a project developer.

1988     In 1988, crackers took possession of the building. A year later, the municipality of Rotterdam decided to buy it for 26 million guilders.

2016      On October 7th, KLM celebrated its 97th birthday. Traditionally, they bring out the new Delft Blue KLM cottage. Hotel New York in Rotterdam was chosen as the 97th KLM cottage.